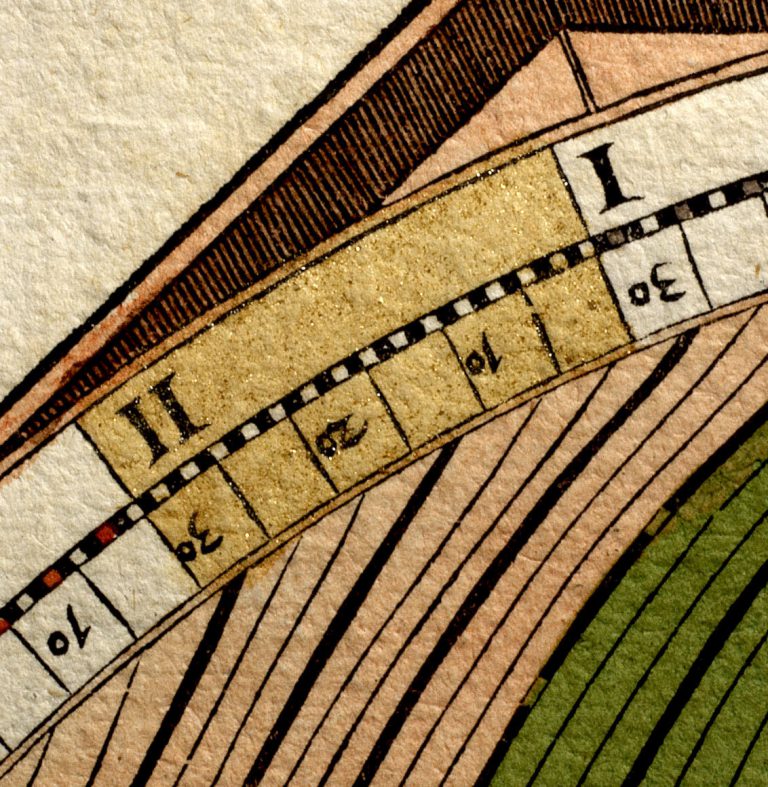 The Founder’s Library at the Fitzwilliam Museum houses an extraordinary collection. It charts the history of the printed book, from the first days of printing in the mid fifteenth century to artists’ books and productions of the private presses today. We are fortunate to have a copy of the Astronomicum Caesareum, one of the high points of sixteenth-century printing, as part of the collection.  Printed in 1540 in Ingolstadt at the press of the author, Peter Apian (1495-1552), this magnificent book was dedicated to the Holy Roman Emperor Charles V and his brother, Ferdinand. It was designed to make astronomy accessible to those who did not have a high level of mathematical education.  The reader is provided with volvelles – moving dials of paper attached to the leaves – throughout the book, the paper instruments allowing astronomical phenomena to be calculated.

Apianus’s work is based on the Ptolomaic system of astronomy, where the earth is assumed to be at the centre of the universe. However, within three years of publication, Copernicus (1473-1543) revolutionised thinking about the universe by suggesting that the planets orbit the sun.  By the seventeenth century, Kepler (1571-1630) described the Astronomicum Caesareum as an elaborate waste of effort!  Although scientific thinking has moved on, the book remains a superb artistic achievement: the typography includes a mirror-image font and decorative lay outs, the volvelles and decorative woodcut initials glow with rich hand colouring, and some of the pastel shades of paint are embellished with tiny golden particles, which sparkle in the light as the leaves are turned.

The book had suffered from damp and insect attack in the past and was repaired and rebound, probably in the early nineteenth century. Repair patches added at that time were very stiff and had caused the original leaves to crack along the edges of the old repairs.  Over-large patches also obscured text.  The binding was also breaking down, with the thin leather on the spine crumbling and the sewing threads either breaking or tearing holes in the spinefolds.

Over the course of the last year, the leaves of our copy of the Astronomicum have undergone extensive conservation work.  This involved the careful removal of the old binding and heavy repair patches, the reduction of disfiguring water stains, and the repair of damage using Japanese handmade papers to make sympathetic infills.

Our copy is one of the deluxe versions printed on very high quality paper made from rags and is remarkably well preserved. It is still possible to see the marks of the rope over which the wet paper was hung to dry, as well as blind impressions of type in blank areas, added to control pressure on the paper during the printing process.  These un-inked letters are known as ‘bearer’ type.

Recently, a team of historians of science joined us in the library to examine and discuss the book, as well as future possibilities for interpretation and digital access. Our scientists are also analysing the pigments in the colouring, and we hope to build up a more detailed picture of the materials and techniques used to make an extraordinary book.

Each leaf has now been digitised and we hope to be able to present the book and our research work on it in digital form in the future for new audiences to enjoy. The next stage of the project is to make a new binding for the book – keep a look out for a further blog post when the work is finished.

Books are something of an oddity in the context of a museum in that they are not only objects which we want to preserve for their historical significance but also machines which have a mechanical function to carry out every time a reader opens them. No one in his/her right mind would dream of cooking in a medieval pot or wearing a pair of eighteenth-century shoes – i.e. of using either object for its original function – but the medieval and eighteenth-century bindings in a library are expected to work to allow access to the texts they contain. Continued use, combined with the ageing of materials used in the construction of the bindings, eventually leads to boards becoming detached and sewing structures wearing to the point where they can break, so generations of bookbinders have repaired bindings as a large part of their work.

One of the incunabula (that is, books printed before 1500) in the Founder’s Library had been given a new spine in the late nineteenth century in order to reattach the front board. Unfortunately, the poor quality of the leather meant that the repair itself was deteriorating and the front board had become detached again. In addition, the previous repairer had used a large amount of hide glue on the spine of the book which prevented it from flexing. The result of this repair campaign was to give an early printed book a spine which would look much more appropriate on a nineteenth-century book. A large part of the interest of this binding was in what lay hidden beneath the previous repairs. As conservation work progressed, the book started to reveal elements of its making hidden for over a century.

On close examination at the bench, it soon became apparent that the sewing structure might well be original and that endbands of braided alum-tawed skin, typical of Germanic bindings of this period, may well have survived under the newer leather on the spine. In addition, a narrow line of parchment was just visible, extending beyond the edge of the nineteenth-century paper paste-downs (the sheets of paper pasted to the inner surface of both boards). Depressions in the pastedowns also suggested that the original pattern of the cutting for the foredge corners of the boards (the free corners on the opening edge of the boards) was of the ‘tongue corner’ type rather than the mitred type suggested by the nineteenth-century repair patches. The ‘tidying up’ by the last repairer seemed to be obscuring a great deal of fascinating information.

After discussions with the curators of the collection, we decided that the need for repair provided a good opportunity to examine the structure of the book further and that the nineteenth-century material could be removed, saving annotations on the newer paper endleaves and the labels for future reference. Unfortunately, the nineteenth-century leather on the spine and at the corners of the boards was far too degraded to save and crumbled into powdery flakes during attempts to lift it. However, when the leather and hide glue on the spine had been removed, it was exciting to find that the original sewing structure and the original braided endbands had survived in a surprisingly good state of preservation, so much so that the whole structure could flex in an excellent opening arch as the original binder intended.

Further investigation on the insides of both boards revealed that the original parchment board sheets were still in place and, further, that they were made from a recycled manuscript document which appears to have had at least six seals attached to it on parchment tabs in its original form – the slits for the tabs to pass through are clearly visible in the sheet on the back board (see the lower edge of the sheet in the image below).

With the leaves of the book flexing from the spine-folds once again, it was also easy to see that the centre of each section had been reinforced by the binder with a folded strip of parchment to help prevent the paper leaves from tearing around the sewing holes. The parchment strips are made from manuscript waste too, although it is not yet clear whether they are from the same document as the board sheets.

The approach to repairing the book was to follow binding techniques of the fifteenth century rather than to re-apply inappropriate nineteenth-century methods. The front board was reattached and the attachment of the back board reinforced with linen braids, secured to the original raised bands with helical stitches of linen thread. The ends of the braids were left long so that they could be frayed out and threaded though the boards next to the original sewing supports to form a sturdy attachment. A slotted loose linen spine-liner was also added to prevent the new leather spine from being adhered directly to the backs of the sections and to form new inner joints in the repaired binding. The lining was carefully cut to fit around the endbands, which remain exposed as the original binder intended.

New archival tanned calfskin was toned and pared to blend in with the original leather before being adhered with wheat-starch paste, again leaving the endbands exposed. The book was then put into a finishing press and strong cord was used to hold the leather tight to the spine and raised bands in the traditional manner during drying.

The corners of the boards were re-covered with patches of the same leather inserted under the original covering material so that the tongue corners are visible once more. When the new leather was dry, the flanges of the linen spine-liner were adhered to the insides of the boards under the lifted edges of the manuscript waste board sheets, which were in turn pasted back into position.

Following conservation and repair work, this book is in safe condition to be consulted by researchers in the Founder’s Library. The opening is greatly improved and many original features of the binding have been revealed for the first time in over a century, allowing the book to give us many more clues as to its making and provenance.