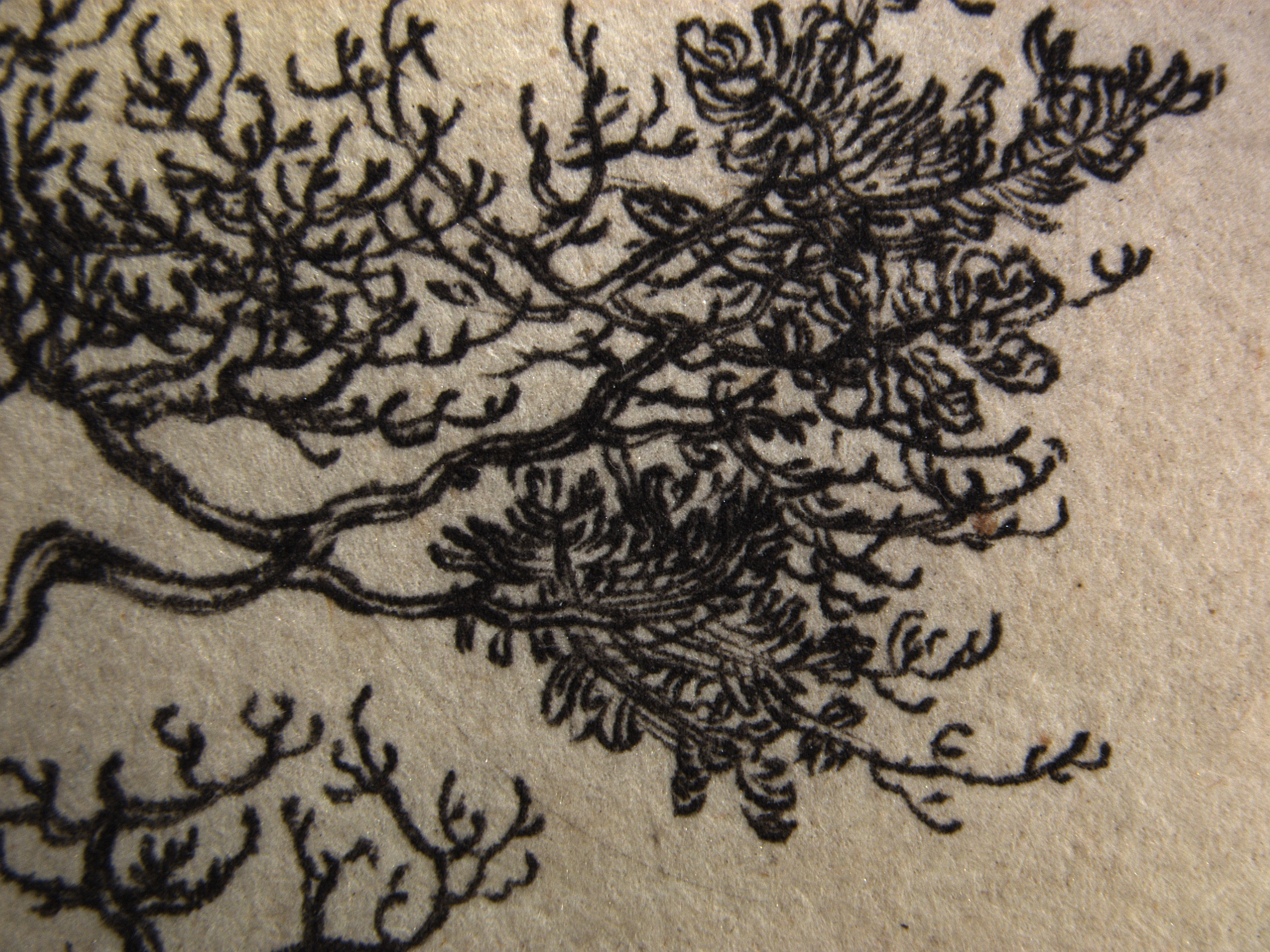 Regarding Dürer Once More

The conservation and remounting of the Museum’s collection of 179 engravings, etchings and dry-points by Albrecht Dürer is now complete. I thought I would update the blog with some further observations I made during the process before I begin to start work on the collection of woodcuts.

I previously mentioned the sometimes dramatic loss of richness and detail that can occur to the printed image as the soft copper engraving plate is repeatedly inked, wiped and printed. Fresh, early impressions of intaglio prints have richly inked lines, strong contrast and fine detail and, as a result, have always been highly valued by curators and collectors. The Fitzwilliam Museum holds three impressions of The Nativity 1504, two of which (P.3097-R & P.3114-R) appear rich and strong with the third (P.3133-R), a later impression from a worn plate.

However, when looking closely at P.3114-R, some areas seem a little ill-defined as the lines are ‘mirrored’, or have a shadow (Fig. 2). This is a result of a printing practice known as a ‘double-run’ where the plate and paper are passed through the press more than once, without lifting the press blankets and paper, in order to achieve a stronger image[1]Stijnman, Ad. (2012). Engraving and Etching 1400-2000: a history of the development of manual intaglio printmaking processes. London: Archetype Publications. 320-321.. The paper can shift slightly in relation to the plate resulting in two sets of lines. It can occur across the whole image as the paper expands slightly each time it passed through the press, and is more common with large plates; but in this example it appears only in certain places with the two sets of lines well registered in adjacent parts of the image. This is a little difficult to explain but may suggest that the paper stuck to the plate in some places, or possibly that the paper was unevenly dampened.

A different approach to strengthening the image was taken with the Fitzwilliam’s single impression of The Ravisher, or Young Woman Attacked by Death 1495 (P.3124-R). A previous owner or restorer has selectively ‘re-touched’ the image, adding ink lines by hand in certain areas, most noticeably to the neck, jaw and left cheek of the woman, and in the curling scroll at the top of the sheet. The additions are relatively easy to spot with the aid of magnification (Fig. 4). The printed engraved lines are very black and crisp, and the ink sits on the paper surface, whereas the hand-applied ink is much more grey and has been partially absorbed by the paper. It is difficult to imagine adding lines to a Dürer engraving in order to improve it, especially as this particular impression is actually quite rich and well-inked.

The removal of old linings from some of these objects during the conservation treatment has occasionally revealed evidence of previous ownership, as is the case with this print. A brown ink inscription ‘FB 1602’[2]Lugt 365 is visible in the bottom right quadrant verso (Fig. 3).  The same mark was also recently discovered on the Fitzwilliam impression of The Four Witches 1497(22.I.3-94). Although this collector is unidentified, s/he is thought to have been Dutch as the mark occurs on prints and drawings from that country. It is also found on fine Dürer prints including the earliest-known impression of the first state of Melancholia in the British Museum (1912,1220.2).

Another collector’s stamp on the back of Three putti with trumpets, shield and helmet 1500 (P.3129-R) reveals that the print was once in the collection of King Ferdinand of Portugal (1816-1885)[3]King Ferdinand of Portugal (1816-1885) (Lugt 968); his sale, J.M. Heberle, Cologne, 29 November 1893 and following days.. Prints from that collection were sold in Cologne in 1893, where this impression is listed under lot 758, ‘Die drei Genien mit Helm und Schild, B.66’. So far, we have seen a copy of the sale catalogue annotated only with prices – it is known that the annotations were made by the Gutekunst firm/family of print dealers, who clearly thought less of the print than the auction house: in the description ‘Beautiful impression with margins’, ‘Schöner’ or ‘beautiful’ has been crossed out (Fig. 5).

Discovering evidence of the work of previous conservators and restorers is always intriguing and I would like to finish this post with a dramatic example. An impression of Crucifixion 1508 (AD.5.22-207) was transferred to the Fitzwilliam Museum from Cambridge University Library in 1876. While at first glance it appears relatively intact, there are some areas of disruption to the printed image near the bottom edge that suggest a more complex story (Fig. 6).

A repair had been made using a section from another copy of the print, and in order to make the join as seamless as possible the paper surface around the area of damage had been pared down to reduce the thickness of the overlapping areas. Unfortunately, the restorer removed a little too much of the printed surface which resulted in the areas of missing image. I was able to remove the patch during my treatment and re-align it a little more accurately. The sheet was washed during the process to remove some of the discolouration.

It has been a real pleasure to look closely at these amazing objects during their conservation. They will be readily available to researchers for many years to come, protected by their new mounts and boxes.